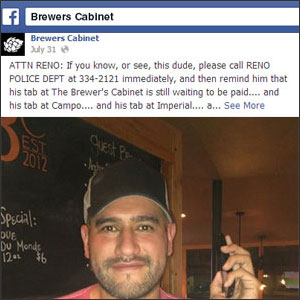 Have you ever been tempted to dine and dash?

What would you do if you realized you had forgotten your credit card at home?

Today we are looking at a story about a man who did not pay his bill and was caught via Facebook.

Saul Zelaznog was out with his friends at a brewpub when his bill totaled $100 at the Brewers Cabinet restaurant in Reno, Nevada. After all of his friends paid, he informed the wait staff that he would not be able to pay as he forgot his wallet. He told the waiter that he would return and pay the bill, but before he left, his photo was taken by one of the servers.

It wasn’t long after that when Brewers Cabinet shared the incident with the social media world on the restaurant’s Facebook page. The story went viral and had over 800 shares.

It turned out that this wasn’t the only time Zelaznog had dined and dashed. Other restaurants came forward that they had been victims as well. One restaurant is reported at stating that he had left his watch collateral.

I’m not trying to burn bridges around town. This is a small little town.”

Thanks so much for your help and overwhelming support in this unfortunate situation. We are excited to announce that Mr. Z has just been taken into custody by the Reno Parole & Probation Department. We hope that all of his outstanding debts are paid in time, but more importantly, that he makes wiser decisions in the future.”

Years ago, Zelaznog might have gotten away with it, but with today’s social media world he was caught. This incident shows that social media is definitely playing a bigger and bigger role in criminal cases.

What do you think?

What is your opinion on the affects social media has on criminal cases? Do you think that this could have potential liability issues?

David recently helped me through a brutal and very difficult divorce. He was aggressive, knowledgeable and incredibly dedicated to my case. David is a class act and well respected in the legal community. He took my calls and emails at all times of the day and gave me sound advice to navigate through a very messy situation. I walked into this thinking I would be paying my ex-husband spousal support and child support even with 50/50 custody for several years. I walked away from it paying him no spousal support, no child support and having primary physical custody of my children. More than anything he helped me separate from a controlling spouse and gave me my life back. I felt like I had an army behind me because David fought so hard for the best possible outcome. A few times, I wanted to fold and settle when I was emotionally drained but he refused to let me get taken advantage of. If I could give David 100 stars I would. You would be hard pressed to find a better attorney or human to have on your side during difficult times.

David Kramer law firm Is very friendly & knowledgeable and took care of all of my needs in a very professional & timely manner.