Unattended Child in Vehicle Charges and Penalties in Michigan 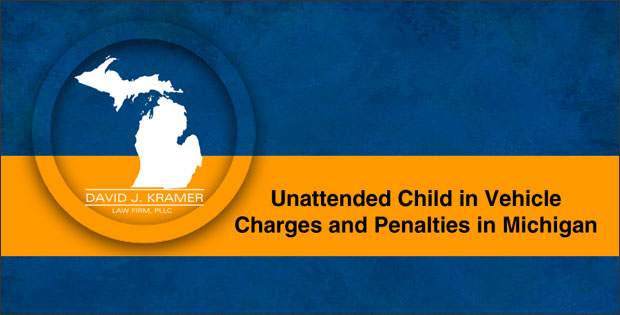 Every parent has felt the temptation. The one in which you see your sleeping baby in the backseat when you need to into the store for a quick errand. Or maybe, your toddler is begging to stay in the car so they don’t have to be dragged around the grocery store.

Many loving and great parents have found themselves in legal trouble because a passerby or law enforcement might have found their child in a car left unattended. If you are facing legal charges, an understanding of the law can be helpful, and understanding your rights as parents is important too.

The Law Related to Unattended Child in Vehicle

Every state law regarding unattended children in a vehicle is fairly similar. Some states have specific laws, while others have guidelines. Each state might vary by a year or so. In the State of Michigan, there is a specific law that addresses the issue of leaving children unattended in a vehicle. The law states according the Michigan penal code that no child younger than six years old can be left in a vehicle unattended. The person attending the child must be at least 13 years old and not be incapacitated. (MCL 750.135a).

To check other state laws, Free Range Kids, has done a good job of pulling the basic laws for each state when it comes to children being alone in cars as well as when they can be unattended in a home.

The Punishment for Unattended Child in Vehicle

To understand the direct implication of a violation of an unattended child in a vehicle, Michigan law has broken it down into different categories. Depending on the exact situation and details involved in the case, will determine the exact punishment a person might be facing. At the very lowest level, if a person is found guilty of leaving a child unattended, they can face a misdemeanor punishable by imprisonment for no more than 93 days or a fine of no more than $500, or both.

However, the punishment can become more severe if the violation results in physical harm other than serious physical harm. This would be the next step up in punishment. It could result in up to 1 year in prison and up to $1,000 fine or both.

When facing a charge of an unattended child in a vehicle, it is important to have legal representation. There are ways to defend and even overturn a ruling.

For example, in Illinois a conviction was ruled as unconstitutional in the People vs. Jordan case. An infant was left unattended in a car in the winter time. The jury found that the “act was stupid, but not criminal” based on the time frame the child was left alone for and the fact the child was dressed for the weather which did not place the child in any physical harm.

When facing charges like this, having an experienced lawyer behind you will be vital. Call me today:

View more honors & awards
I recently fell into a situation which could have affected me and my family for years to come. I approached different attorneys and only had limited options. After careful consideration and the confidence he instilled in me, I chose to proceed with David J. Kramer law firm which proved to be one of my best decisions.

From the beginning, David had the best interest towards my case and not only defended me but was able to deliver an outstanding outcome beyond my expectations. My charges were dismissed and i was left speechless. I am very grateful for his phenomenal service and take this opportunity to recommend him to anyone looking for the finest defense by their side.
Sri T.
David Kramer is and has been the BEST attorney I've ever hired....at first, I thought all his awards hanging in his office were for show.....trust me when I say, he's that good at what he does. He's also a pretty great guy if you get the chance to get to know him. I was dealing with some pretty heavy stuff in my life, I'm sure many guys (particularly Fathers) know what I'm talking about......David had the magic touch; If I didn't know better, I'd say God introduced us. He knew the right people and is very knowledgeable when it comes to the law, but above all, he treated me with respect and with compassion. Well worth every penny. Wish I had met him before I went through my divorce. I'd hire him again in a heartbeat for any legal matter.
Chris R.