Misdemeanors in Michigan: Most Asked Questions 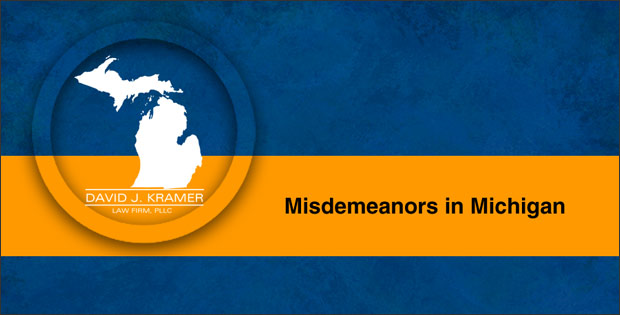 Whenever you hear about stories of people getting caught urinating in public or trespassing, it can be hard to imagine them getting arrested and serving time in jail.

However, those are just two examples of common misdemeanors that happen in Michigan. Chances are that you or someone you know has been charged with some kind of misdemeanor. While misdemeanors are in the lessor side of civil acts, they can still have a significant impact on your life and can negatively affect your record.

The three most common questions that we get asked about misdemeanors are: What exactly are there, what are examples of misdemeanors, and what is the penalty of a misdemeanor? Let’s unwrap each one.

What is a Misdemeanor?

A misdemeanor is when a person is charged of a crime. Typically, there are two categories of crimes: felonies and misdemeanors in Michigan. Misdemeanors fall into the lower level of crimes that one can be charged with – besides traffic and parking tickets. For those that live in Michigan, the District Court is the one that handles misdemeanors.

What Crimes Are Considered Misdemeanors?

Some misdemeanors can be considered a felony depending on the exact situation. Here is a list of some of the most common misdemeanors that those are charged with in Michigan:

What is the Penalty of a Misdemeanor?

While each situation can be a little difference and the penalty will be determined by the exact details of the crime, when one is convicted of a misdemeanor, they can expect to pay a fine, and serve up to 93 days in a city or county jail. Examples of a misdemeanor with at penalty of 93 days in jail would be assault and battery, or disrupting the peace.

Misdemeanors Punishable Up to One Year in Jail

A little more serious misdemeanor can have more severe consequences like a higher fine and longer jail time. An example of these kind of misdemeanors would be retail fraud like shoplifting.

There is the possibility of being charged with a high misdemeanor. That can be punishable up to 2 years in prison and or a fine of up to $2,000.

When Facing a Misdemeanor Charge

When you or someone you know is convicted of any one of these misdemeanors, it can greatly impact one’s life. Having a misdemeanor will go onto a permanent criminal record. In addition, when you have one misdemeanor and you are convicted of another crime, a judge may impose a harsher sentencing for the second time round.

While a misdemeanor charge might feel small and insignificant, it can greatly impact your life. Having quality legal representation with experience will help to guide you in the possibility of dismissal charges, explore plea options, or to represent you as you to go trial.

Call today to see what your options are:

View more honors & awards
David Kramer is an aggressive and effective advocate for his clients. He helped me to resolve a serious legal matter to my satisfaction. I highly recommend him for his detailed knowledge of the law and his excellent representation and client service.
Tim H.
I have worked with David on many cases. He is experienced, knowledgable, well-respected and he cares passionately about his clients!
Deanna K.