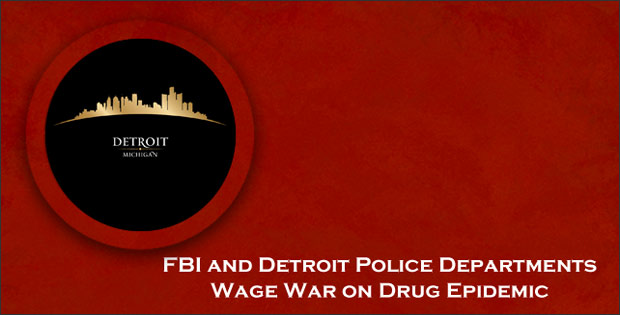 Detroit’s drug epidemic “plagues our society and dampens the quality of life within our communities.”
-James Craig, Detroit’s Chief of Police

The FBI led raids this week in the Metro-Detroit area targeting heroin traffic and sales. There were 7 search warrants distributed all sounding Derby Street in Detroit. CBS reported the FBI tracing many of the Detroit area heroin overdoses and deaths to a Woodward Ave. passageway.

This raid according to the Detroit Free Press is in response to the increase in drug overdose and death that southeastern Detroit has seen. Federal Prosecutors have said that heroin overdoses have tripled in the U.S between 2010 and 2013. There has been a 62% increase in opioid deaths alone in the Midwest.

In Washtenaw and Wayne counties, over 60 people have died due to a heroin and fentanyl overdose this year. Compared to 2013, in 2014 heroin overdoses have double in Oakland County.

These numbers are frightening. The Free Press reported U.S. Attorney Barbara McQuade of the Eastern District of Michigan saying “at the time that the state has seen a “huge spike” in prescription pill abuse and a resurgence in heroin as addicts turn to that as a cheaper alternative for their opioid addiction.”

Back in July, the Detroit Free Press released an article about how heroin is entering into new communities. More women and middle-class individuals are being addicted to prescription drugs and switching to cheaper illegal options.

The Center for Disease Control and Prevention has said heroin use has grown by 60% among households who make $50,000 of more.

Not Just a Detroit Matter

This is not just a Detroit issue. The Oakland County Sheriff Michael Bouchard has said that Royal Oak is one of the cities that have seen an increase in heroin overdoses, even while the distributors do not operate in Royal Oak.

Detroit’s Chief of Police James Craig was reported as saying that along with the FBI and other agencies will continue to target Detroit’s drug epidemic. This week’s searches were a part of an ongoing effort. The goal of this effort, according to the Detroit Free Press is to “disrupt the illegal distribution of heroin, and disable the drug trade in Oakland, Wayne, and Macomb counties.”

An FBI special agent was quoted as stating,

“The FBI, along with its law enforcement partners, is committed to working to combat heroin and other illegal drug problems, and the violence that is all too often associated with drug trafficking, which impacts daily the quality of life in our communities.”

The State of Michigan’s Commitment

No matter your background, struggling with substance abuse can be demoralizing. The State of Michigan has been working hard to get those suffering from substance abuse issues and facing criminal charges the real help they deserve. For more information on that, please see, Michigan’s Specialty Courts Making a Huge Impact.

If you or someone you know is facing criminal charges and has sobriety needs, make sure to call my office today.

View more honors & awards
I cannot say enough great things about David. He is professional, responsive, extremely knowledgeable, well connected, and most importantly he gets the job done. He will go over and above and work in your best interest. I wouldn’t think twice about hiring any one other than David Kramer to represent me as my attorney.
Anthony A.
Mr. Kramer represented me for my divorce and did a fantastic job. His hard work, dedication and countless hours spent on my case was nothing short of a class act. His knowledge of the law and persistence resulted in me getting a more than fair amount of time with my son. I would highly recommend him to anyone. If your looking for a great attorney that knows the law Mr. Kramer is a wise choice.
Tony G.