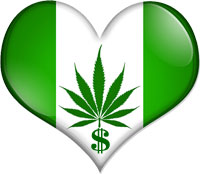 Have you read how much money the marijuana dispensaries made in the first week of being open?

Will Michigan be following in Colorado’s footsteps?

January 1st, 2014 marked the first day that residents of Colorado could purchase recreational marijuana. Thirty-seven dispensaries opened their doors all over the state. In the first day they were open over $1 million dollars worth of marijuana was sold.

The Huffington Post reports that over the entire first week, $5 Million dollars in sales for recreational marijuana was collected.

It has been projected that the combined wholesale and retail sale of recreational marijuana will be about $600 million annually.

You may remember that Colorado residents passed the state’s 25% tax on retail purchases. That breaks down to a 15% excise tax and a 10% sales tax. Those taxes do not include local taxes.

There are restrictions to what residents in Colorado can buy including that one must be over the age of 21 to purchase marijuana. In addition, Colorado residents are legally only allowed to buy up to an ounce per transaction. Tourists or out-of-state visitors are only allowed to purchase one-fourth of an ounce.

The Federal Government Has Agreed to Stay out Of Colorado and Washington’s Way IF:

What Does This Mean For Marijuana Sales in Michigan?

According to The Daily Chronic, changes are happening in Michigan as well. Recently, Governor Rick Snyder signed Senate Bill 660. Senate Bill 660 regarded medical marijuana in a “pharmaceutical grade” giving it a Schedule II status. This bill will allow licensed pharmacies across the state to distribute marijuana.

The law allows “pharmaceutical grade” marijuana to be distributed through licensed pharmacies in the state, controlled in a manner similar to drugs such as OxyContin or Percocet. The law requires strict laboratory testing for quality and dosage standards.”

This law can only take affect when the United States also reschedules marijuana on the federal level. Right now, marijuana is still classified as a Schedule I drug.

What do you think? Will Michigan legalize marijuana use? Please share your thoughts in the comments below.

David is one of best attorney in Detroit area..he is highly experienced and talented with tons of accolades ,you can just trust him and he will do it for you ..I strongly recommend to others

David Kramer has far exceeded all expectations in a recent DUI case in Oakland County. David’s immediate response, diligent follow up, knowledge of the law and relationships within the system, all contributed to a timely, significantly reduced sentence. He was able to accomplish what no other lawyer said could be done. His professional, direct, no bs approach was appreciated, effective, and confidence inspiring during a difficult situation. As in life, you often get what you pay for and this is no exception as David is worth every cent. Not only is David a great lawyer he’s a great person as well. Thanks again David.