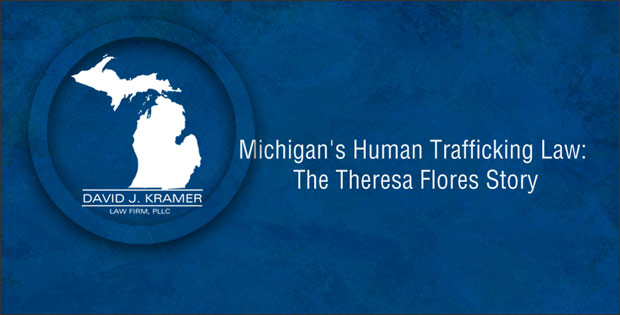 Theresa Flores was just 15 years old, white, all-American, Catholic, and a virgin when she was trafficked by a fellow classmate.

For two years she was blackmailed into sexual slavery from her suburban Detroit home and only saved when her father’s job moved her family to a different state.

This is the unseen reality of human trafficking in America, and according to the FBI, 100,000 kids are being trafficked in this country right now.

Theresa had just moved to Birmingham, Michigan when she met the student who would become her trafficker. She had had a crush on him, and although she felt the red flags go up when he made a detour, invited her into his house, and offered her a coke, she ignored them when he said he liked her.

Her classmate had drugged her drink. He raped her and, having had it photographed by his cousin, blackmailed her with the pictures of the rape. He told her she would have to work to get the pictures back or her father, his employer, and her priest would see the pictures.

Because Theresa was terrified her parents would not believe her and disown her, she did not report the rape. When the calls began to come in the middle of the night, she would sneak out of her bedroom in her pajamas and bare feet to be locked in a basement bedroom, sometimes tortured and raped by no fewer than two men per night several times a week.

As the slavery continued, the threats became graver. Her traffickers told her they would kill her or her family members if she talked. So, even when her treatment got worse – one night she was brought to a run-down motel to be raped by 20 men and left by herself to be taken home by police – she was too afraid to tell anyone.

Now, as a social worker and after many years of healing, Theresa likens her thought processes at the time to that of a person trapped in a cult. She didn’t believe anyone could help her. She didn’t know that what she was experiencing was human trafficking.

In 2014, Governor Snyder signed a package of legislation which was inspired by a 2013 report by the Michigan Commission on Human Trafficking. It makes human trafficking punishable by imprisonment for life and permanently creates the state Human Trafficking Commission within the Attorney General’s Office.

There are two types of bills in this legislation: bills strengthening punishments for human traffickers and bills providing support for victims. The bills were inspired partially by of Flores’ story.

Bills strengthening punishments for human trafficking offenders include according to the State of Michigan include:

Bills providing support for victims include:

As the threat of human trafficking has risen in this country, the awareness of its realities has finally started to rise as well. Thanks to the new laws passed in Michigan, more victims can come forward, knowing there are more protections in place for them.

Michigan now has one of the best responses to human trafficking of any state in the country.

If you or anyone you know has been involved in human trafficking and you need help, please call the National Human Trafficking Hotline number – 1 (888) 3737-888.

View more honors & awards
David Kramer was an amazing attorney from start to finish. At our first meeting he answered any question I had and I left with complete confidence that he was the right guy for the job, and I was right. He is incredibly knowledgeable about the ins and outs of the law and is respected and liked which made the whole process so much easier. Everything that he said would happen did and at no point did I feel let down or like I had to settle for something I was unhappy with. If you want an attorney who will fight for the absolute best outcome and reassure you the whole way David Kramer is definitely the way to go.
Anna S.
David is one of best attorney in Detroit area..he is highly experienced and talented with tons of accolades ,you can just trust him and he will do it for you ..I strongly recommend to others
shravan k.