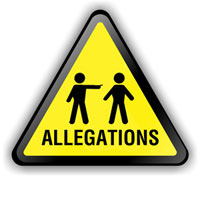 What happens when someone in authority is suspected of breaking the law?

What if the person is innocent?

When anyone is accused of criminal sexual conduct, it is almost as though they are convicted on the spot. Even if the allegation is unfounded, the action can lead to a suspension of job, the hiring of a lawyer, and pressure on your family at home.

Is a Person Guilty Until Proven Innocent?

The person being accused may be completely innocent, but they still have to go through the legal process to prove it. In our culture, it seems that in cases concerning criminal sexual conduct, they are guilty and then proven innocent.

I remember a story that an acquaintance told me about. When this person was young, she worked in an office. The office personnel had the employees watch instructional videos and one of them was about criminal sexual conduct in the work place. In the video, someone had been falsely accused of criminal sexual conduct. The time and money it took to hire a criminal defense attorney set him back, not only financially, but also with his work.

In some cases I’ve seen people suspended from their jobs due to such accusations. What happens though, when those people are innocent?

Consider the instance of unnamed Kalamazoo County sheriff’s deputy who is under investigation and on administrative leave after allegations of criminal sexual conduct with a female inmate. The name of the deputy is not being released pending an investigation by the Michigan State Police,

In the case of this sheriff deputy, it appears that at least right now, the identity of the deputy is being protected until criminal charges are issued or his job is terminated according to CW7 Michigan – Kalamazoo TV.

In a separate report by MLive.com, the Sherriff’s department has “also declined to release any details about the accusations, saying only that a deputy is being investigated for ‘improprieties’.”

When facing a criminal sexual conduct accusation or a charge, make sure to hire an experience criminal defense attorney that will fight for your reputation and innocence. If you know anyone in this situation, please encourage them to call my office at:

If you’re innocent you might be inclined to let the justice system run its course. Don’t do it. If you are innocent, you need an attorney, and David Kramer is the guy. He gave great guidance and also insured that everything was in place so that the door was shut on the false charges we faced.

Dave took the time to review my case ttimely and thoroughly to discuss all of the steps and prepare me for what to expect. He made everything easy and was able to secure an outcome that was very favorable. Cannot recommend him enough.