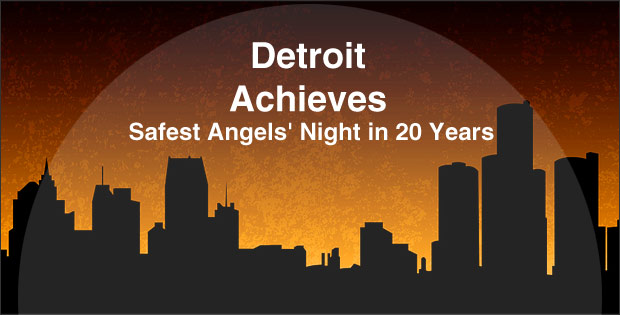 Were you one of the volunteers for Angels’ Night?

The residents of Detroit have rallied together for the safest Angels’ Night in 20 years.

Angels’ Night has been a tough campaign for the City of Detroit over the years. It started in the 1990s and what was traditionally called Devil’s Night became Angels’ Night.

Devils’ Night or Angel’s Night is the night before Halloween. It started in 1930s as a night of mischief for youth. However, in 1985, it spiraled out of control. That year the City of Detroit reported 800 fires on Devils’ Night.

It was 20 years ago when the police departments and the fire departments started to combat the arsonists. Soon, the City of Detroit started calling on residents to help patrol the streets of Detroit, to keep the porch lights on, and to have a watchful eye. A curfew was instated for the city’s youth and dispensing of gasoline into potable containers was restricted.

According to the Detroit Free Press an emergency ordinance prohibits the dispensing of gasoline into portable containers in Detroit until Halloween evening at 11:50 pm, unless there is an emergency and the person dispensing is 18 years or older.

In the last 3 years, Detroit had reduced the number of fires to about 100 every year.

The Detroit Free Press reports that over 3,500 volunteers registered this year to help patrol the streets for the 3 nights leading up to Halloween.

One of those volunteers was Greg Jackson. Greg Jackson, along with some of his friends, took to their bikes and patrolled the city. Jackson is a member of West Side Riders. In another article by Detroit Free Press, it is reported that Jackson has orange lights that run up the frame of his bike and a speaker mounted on the back rack that played music.

He was quoted saying, “We want to stop the firebugs from lighting everything on fire. They hear and see us and it deters them.”

According to the City of Detroit, there were only 52 fires reported during the 3 day period, from 12:01 am October 29th to 12:00 am November 1st. Only about 23 of these fires were deemed suspicious.

Mayor Duggan had this to say,

“I can’t say enough about the dedicated volunteers who have come out year after year. This is their accomplishment. This was a total community effort.”

A few interesting facts from that 3 day period are,

Here are the past years of pre-Halloween arsons as reported by the City of Detroit:

This year’s pre-Halloween arson numbers are a direct result of the community of Detroit joining forces with Detroit’s police and fire departments. This is a shining example of what a city can do when there is a dedicated effort to make a change.